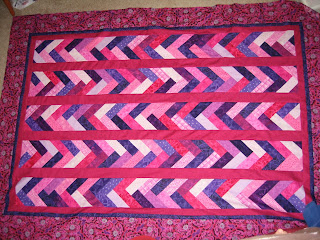 So I finished the top of the braid quilt I started on Sunday with KK (the one using the jelly roll). Yay!  It's always exciting to see a completed quilt top.  There are several things I would do differently if I had to do it again, but I was more focused on working with fabrics that I had, which I did a good job of doing.
The main thing I would do differently would be to change the color of the pink that's in between the braid and the inner border.  I wish I had used a light pink instead of the deep pink. 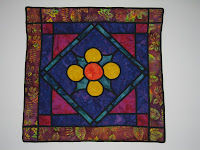 The problem is that there isn't enough contrast between the pink, the purple inner border, and the actual border.  I had the same issue with a stained glass quilt I made several years ago.  I think the real problem is that I love these colors so much together (because I had the same issue with the same colors) that I don't look past the colors to the tones of them. See... the only that that really stands out in that quilt is the bright yellow.
Don't get me wrong, it doesn't look horrible.  It's a beautiful quilt, I would just do something differently next time.
I did enjoy using up some fabrics from my stash.  I didn't purchase a single fabric for this quilt.  It was made entirely with fabric that I had in my stash (ok, so I bought the fabric in the stash, but I didn't buy the fabric recently) and a jelly roll that my husband, Corey, gave me for
Christmas.  It involved improvising on some of the dimensions, but what fun is quilting if you always follow all the directions.  It's like cooking, I almost never follow recipes.  I always add a little of this and a little of that... you get the idea. 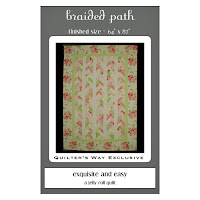 One of the things that I did differently (from the pattern that is-pictured left taken from quiltersway.biz) was that I changed the width of the first inner border around the braids.  The pattern called for it to be cut 3" just like the width of the "sashing" in between the braids.  I didn't have enough fabric to go all the way around at 3", so I cut the fabric to 2".  I think it still came out well.  I really wanted to make the braids appear as though they were floating by using the same fabric for the sashing and first inner border.  It took the entire yard of fabric that I had for this.  The original pattern called for a yard and a half.  This just g
oes to show you how you don't always have to follow the directions exactly and that you don't have to be afraid of a pattern because you don't have enough fabric. 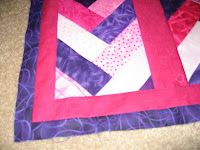 The other thing that I did differently was adding the second inner border.  The pattern didn't call for it, but I thought it was a nice touch.  I also think it helped to add some contrast between the first border and the final outer border.  It wouldn't have looked as good if I had just added the border like the pattern called for.
In the end, it was fun playing with a jelly roll.  I would do it again.  This was a pretty large quilt (about 85" tall), much larger than many of the ones I've been making lately.  I'm not so sure if I'm going to be able to quilt this myself.  It might be too big to do on a standard sewing machine.
It might need to be done on a long arm.  We'll see.  I have a bunch of other quilts that I still need to machine quilt.  I need to take some time to get some of them done instead of continuing to make the tops.
That's all for now, it's off to go have a nice new years eve dinner with the hubs (and possibly do some more quilting while we wait for the ball to drop together).  See you in 2009!
Posted by Jen at 5:35 PM No comments:

My aunt KK and I decided that we have always wanted to try a jelly roll quilt sometime.  We ended up getting several jelly rolls for Christmas and decided to get together for a day and make a quilt using one.
Corey got me this really cute jelly roll for Christmas in pinks and purples (pictured below - image from QuiltersWay.biz) that I decided to use.  I also had a cute pattern that I got from Quilters Way in Concord. 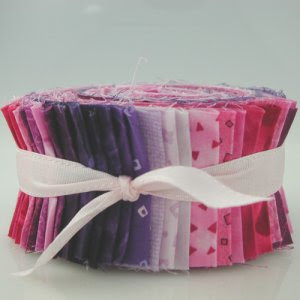 We decided to get together yesterday to make a quilt using our jelly rolls.  I used a braid pattern I had from Quilters Way in Concord, MA they made especially for jelly rolls.  It was a lot of fun working on it.  The initial cutting took a while, which was surprising since they were already cut into 2 1/2 inch strips.  I had to cut all 40 of the strips into six or seven 6"x 2 1/2" pieces.  At lease once I did all that cutting I didn't have to do any more cutting until all of the braids were made.  You can see the beginning steps of the quilt below.  I have to add sashing in between each braid, the inner border, and the outer border.  I'm debating between purple or pink for the border color.  We'll see what I decide to do. 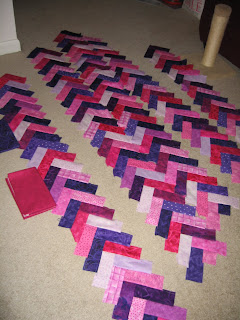 
A few months ago, my aunt (my quilting buddy) and I decided to do our own mystery quilt.  We had originally wanted to take a class somewhere but couldn't find any that we really liked, so we decided to do something ourselves.
We decided that we would each pick a pattern and an inspirational fabric for the other person to use.  We would then type out the step-by-step directions that we would give to the other person as we moved along.  We'd then meet up at one of our favorite quilt stores, present the inspirational fabric to the other person along with the fabric requirements.  In the end, the quilt that we were making would be given back to the person who picked the pattern and fabric.  (I'd keep the one we made if I had to choose next time.)
We really enjoyed doing the mystery quilt.  It was fun not knowing what you were making and seeing it evolve over time.  It was also fun seeing how the other person was interpreting the directions I provided and how they were picking the fabric.  It was obvious that we would each have picked different fabrics and where we placed
the fabrics if we knew the design.
As you can see with the photo below, I would have placed the colors differently, especially the yellow.  The inspirational fabric that was given to me was the border.  It was a step out of my comfort zone since I usually pick more modern/funky fabrics instead of the flowery, more traditional fabric. 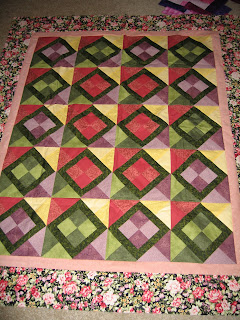