Here are a few pictures of Lynn's Bento Box quilt that she started during our gathering on Saturday.  I think it came out great.  I just love the colors.
This was layout 1.   It looks good, but not as nice as layout 2. 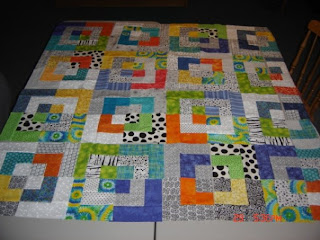 And here's layout 2, the layout she ended up going with.  I love this layout.  I like how it has the traditional Bento Box feel with the alternating dark and light values next to each other in each quilt square. 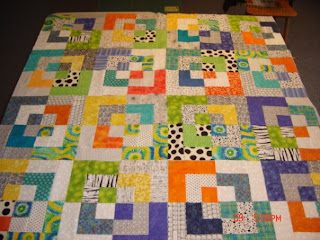 Yesterday was our quilting gathering.  We got together around 10am and went until about 4:30pm with a small break for lunch.  We debated for a little while on what we wanted to do. All do the same pattern? Mystery Quilt? A quilt based on a color or theme?  Hmm...  After a little debating, we decided to all do a Bento Box quilt.
Prior to getting together, I did some pre-work and cut a bunch of strips so that I could spend more time sewing and less time cutting. 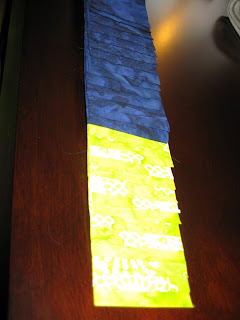 Here's a picture of my first block and KK's first block. We both decided to use just two fabrics for an interesting, dynamic quilt. 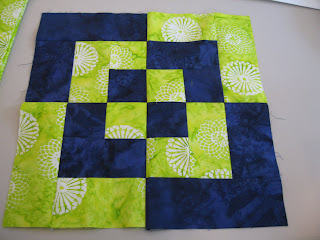 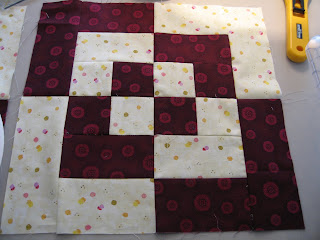 Lynn was doing a scrappy look with some blues, greens, and yellows paired with black and white fabrics.  Things were coming along nicely, but when she started to arrange the blocks together, things just didn't pop.  We realized that she needed more contrast, so we went and explored her stash.  We picked out some darker blues and brighter yellows that really helped.
THEN... I pulled out a few orange fabrics and WHAM, that's what the quilt needed.  Here we are auditioning different oranges with the blues, greens, and yellows.  You can see one of the quarter squares in the bottom right of this picture that just didn't go.  Ok, it went, but it just didn't make things pop.  Look at how those colors work together now! 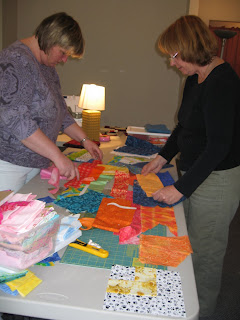 Here's a close up of us auditioning all the fabrics.  I can't wait to see how it all comes together. 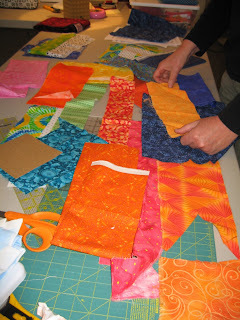 And finally, here's a picture of the four blocks I was able to finish.  I finished another 3 last night when I got home.  I have a lot of pieces sewn together, so while it doesn't look like I got a lot done, I really did.  I'm loving how just the two fabrics work together. 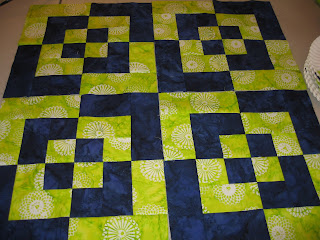 This coming Saturday, KK, Lynn (a co-worker), and I are getting together for a quilting gathering.  We all decided to do the same pattern, a Bento Box.  I've been wanting to make one of these for a while and I thought this would be an easy quilt to make and wouldn't require a lot of concentration since we'll probably be gabbing the whole time.
Here are my fabric choices.  What do you think?  I'm SOOOO excited about them.  It will be made with the navy batik and the bottom lime green batik with the top lime green as the border.  This will help meet one of my 2009 goals, to make a quilt using batiks.  I've always loved batiks, but have never really used them to make a big quilt.  I've only made a few small wall hanging with batiks. 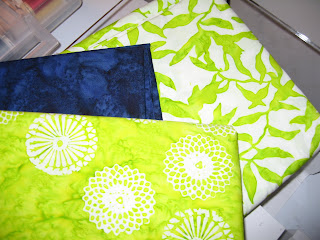 I'm thinking of doing some cutting prior to our gathering so that I can spend more time sewing.  I think KK was planning on doing the same thing.  Now I need to figure out what kind of baked good I want to make and bring since I promised I'd bring something.  It can't be chocolate, even though I'm a chocolate addict, because KK doesn't like chocolate (gasp).
I've been working on my autumn quilt.  I just have two more sides of the border to add and I'll be done with the top.  Here's a little peek.  I hope to have the top done by the end of the week. 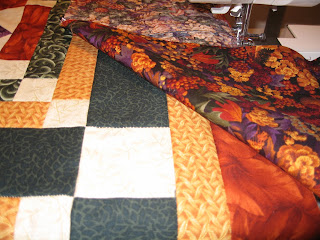 I finished the March Scenic BOM tonight.  This one took the least amount of time to make.  For some reason, the fabric choices came easy for this one.  I bought an extra fat quarter of Mark Lipinski's fabric at his event a few weeks ago knowing that I would use it for the setting triangles for this block because they have a St. Patrick's day feel to them, so that's probably why the fabric choices were easy.  Plus, I knew I wanted green grass, so it really didn't take a lot of color decisions. 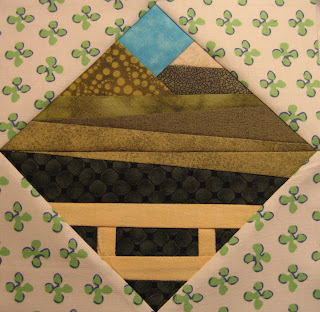 I like this block.  I'm really glad that it was more scenic and not another house block.  I have a bunch of Easter fabric for the next BOM.  I'm excited to see what it looks like.
Posted by Jen at 9:42 PM 2 comments:

This Venetian Mask came home with me on my trip to Italy two years ago and sits in my quilting room.  It's covered in fabric unlike the traditional masks that are often painted or covered in colorful paper. 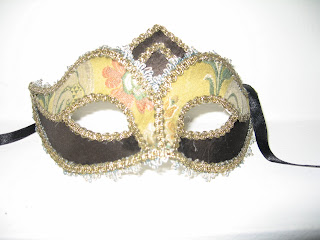 We saw them making some other masks out of fabric.  They had a huge stash of fabric scraps that they used to make these masks.  They're mainly made out of upholstery fabric, but it looked like there were some silks and other types of fabric in their stash.
Posted by Jen at 9:48 AM No comments: 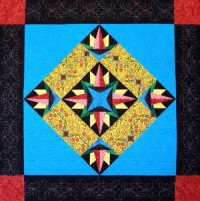 My aunt, KK, and a co-worker of mine, Lynn will be taking this class together. I don't know if I'm going to make it until August. It seems like so far away. How am I going to hold out making this until then. I think I'm going to TRY and wait to pick out my fabric for this until a little closer to the event. "Try" is the key word there. I'm really trying to cut back on my spending because DH and I are looking at houses and we're really trying to build our savings to really build a nest egg in case anything happens.

Whenever I hear "Fire and Ice," I automatically think of the Robert Frost Poem:

Some say the world will end in fire;

Some say in ice.

From what I've tasted of desire

I hold with those who favor fire.

But if it had to perish twice,

I think I know enough of hate

To know that for destruction ice

I've been quiet lately because I've been battling a cold. Yuck. I haven't been sick all winter, so it was about time I got sick. Plus, we've had some really weird weather around here where it's nice one day and snowing the next. I don't think that has helped me. Plus, last weekend a bunch of friends and I went down to Mohegan Sun for a girls night out and spent the night down there. We had a blast.

Almost Done with the Autumn Quilt

I've been trucking along on the autumn quilt.  It's almost done!  I just have the borders left to do.  The inner border is the gold fabric, the middle border is the burnt orange, and the outer border is a leaf pattern with many of the colors featured in this quilt. 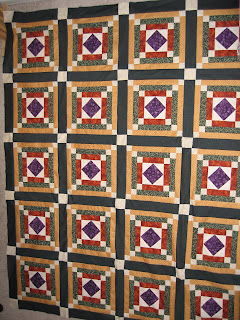 Since this is going to be a queen size quilt, I think I'm going to send this one out to be quilted by someone with a long arm.  My co-worker has a friend who does long arm quilting professionally, so I might give her a try.  I'm thinking an all over pantograph with leaves in it.
This quilt has really grown on me.  Initially I wasn't super fond of some of the colors (ok, just the burnt orange), but I'm really liking how this is coming out.  The pattern was very easy to do and I think it's really coming together visually very well.
Posted by Jen at 8:05 PM 2 comments:

I ordered a two charm packs online a little over a week ago and was excited to do a crazy 9 patch with the squares.  I loved the fabric but I didn't want to buy a ton of it.  It's so hard to tell what fabric will look like online.  There have been several times when the fabric I've ordered online hasn't been exactly what I expected.  I figured charm packs were a safe bet to see what the fabric was like.  Plus, I've never worked with them, so I thought it would be a fun way to try both new fabrics and a new type of fabric bundle. 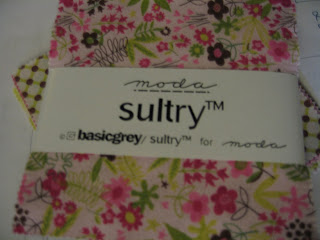 The charm packs finally came in the mail a few days ago and I could finally give it a try. I'm glad I ordered the charms packs because the fabrics weren't as bright as I expected and I'm not sure I would buy some of the fabrics that I thought I would have.  I do love how all of the fabrics work together.  This might end up being a cute quilt for a baby girl.
Onto the actual creation of the crazy 9 patch... I created piles of 9 squares each, trying to mix up the colors in each pile.  I ended up with 8 piles total since there were 40 squares in each of the 2 packs I had.  I finished one pile and am in the middle of working on the other 7.  I might need to order one more so that I can have 12 total.  That way, I can combine the 9 squares from each pile into a block and have a quilt that's 3x4 blocks.  Right now, it's tough to do something with only 8 blocks. 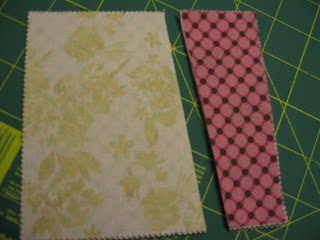 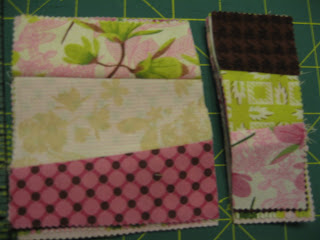 Here are the finished crazy 9 patches with one pile.  They end up being about 4 inches square once complete.  7 more piles to go! 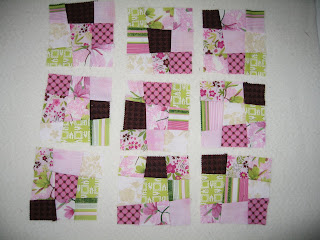 I think I might add some sashing in between each square.  It's still a work in progress.  Maybe I'll turn these 9 into one block using sashing and then combine the others with a different color sashing.  Just a thought.  We'll see how things progress as I finish the other piles.  This is going to be fun.  I'm enjoying making things up as I go along.  This is really the first quilt that I'm doing it with.  I guess it means that I'm getting to be really comfortable after quilting for 6+ years now to be more adventurous.
I'm curious, have you used charm packs before?  If so, what have you done with them besides just sewing the 5 inch blocks together?
Posted by Jen at 9:08 AM 2 comments: