Modern She Made Swap Round 2

I've had a lot going on personally this month, so I haven't really been doing much sewing.  When I say a lot, I mean a lot. It's just not something I'm comfortable sharing in such a public forum right now.  As a result, I haven't really been in the mood to quilt since I've been dealing with a lot.  Having Angela Walters come visit last weekend and spending time with the guild was very helpful and finally got me in the mood to get back to sewing.  In addition, to help get me through these difficult times, I decided that I was just going to jump into a few things to keep me busy.  One of those things is the second round of the Modern She Made swap.

I participated in the first round and really enjoyed it.  I made this awesome pillow that I hated to give up, but
I did.  I also received a great mini quilt and armrest pincushion that I use whenever I bind my quilts. 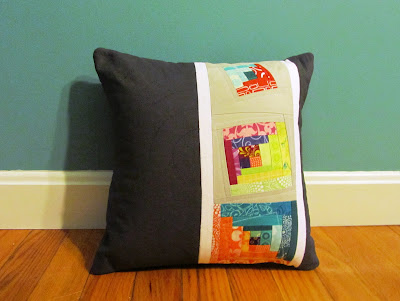 Here's the mosaic that I put together for inspiration for my partner.  I asked for a pillow for either my basement where I just redid it in a grey and yellow color scheme or my guest bedroom that I'm redoing in a blue/grey wall color with lime and fuchsia accents.  I also said I could use a mini quilt for the space too. I really enjoyed this swap last time and I'm looking forward to making a new item for my partner and seeing what is made for me. This is the initial design that I sketched up for my partner.  It will be a pillow with the background being made in a bunch of low-volume prints in a postage stamp style.  The colors will be in some earth tones and there will be a pieced wonky leave that is appliqued down to the top of the pillow.

Time to get cracking on this one.
Posted by Jen at 8:00 AM 3 comments:

Email ThisBlogThis!Share to TwitterShare to FacebookShare to Pinterest
Labels: a quilting jewel, modern she made, msm, pillow, swap

I shared some pictures from the trunk show Angela Walters gave the BMQG this weekend yesterday.  Right after the trunk show, I got to take a class with Angela and learned all about machine quilting the modern quilt. 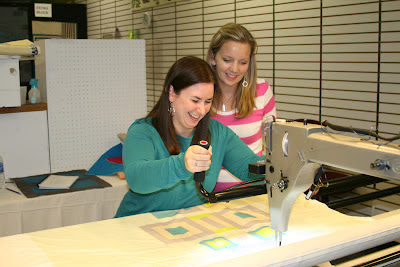 Quilter's Way recently moved into a new space and added a long arm to their store.  As a result, this class was all on the long arm.  I've rented a long arm a couple of times, but my technique on one is not near as good as it is on a domestic. There was a bit of a learning curve for me in adjusting to the long arm, but conceptually, i think I was able to grasp everything. 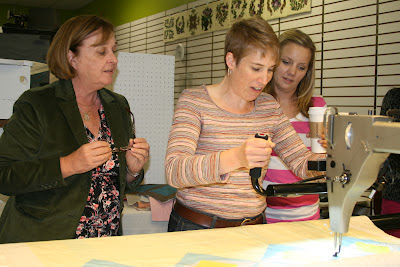 There were five of us in the class and we all took turns using the long arm to try different designs and techniques. 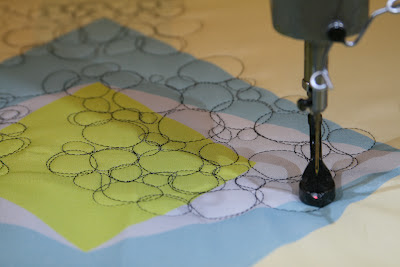 We started with pebbles, something that I'm fairly familiar with.  One of the great things with Angela's class is that she shows you three different ways to do a certain technique, increasing in difficulty.  I think my pebbles turned out pretty good given that I hadn't been on a long arm in a few years. 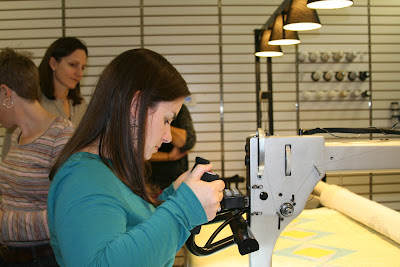 We then moved onto swirls.  Swirls are one pattern that I have struggled with in the past.  I struggle with the spacing at times.  I found getting spacing down even more difficult on a long arm, but overall, I think I did pretty good. 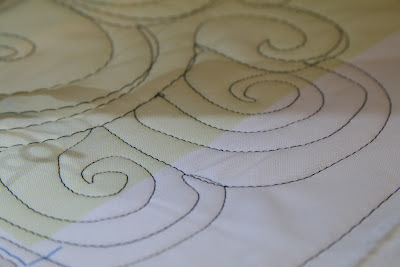 Of course, I had to try one of the more difficult patterns here, not the simplest one.  But hey, that's just who I am.  Give me a challenge and I'll usually accept it. 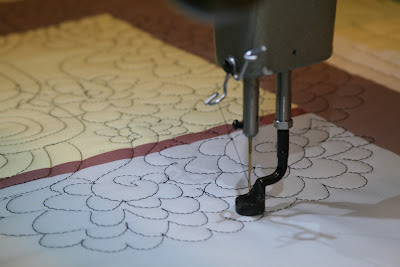 I did, however, think I did a pretty good job at the next pattern.  I could certainly see myself doing this quilting design on a quilt.  I'm actually thinking it might be good on a one block wonder top I've had sitting around for what seems like forever. 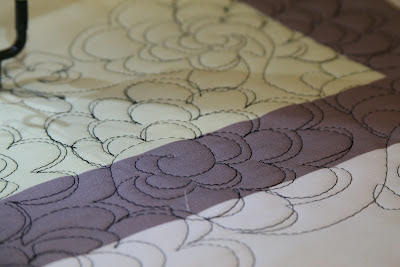 I also really enjoyed, and thought I did good on the more difficult version as well.  What do you think?  Pretty good, eh? 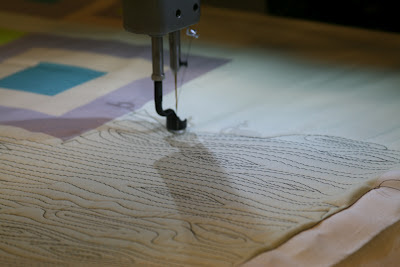 I also really enjoyed quilting a wood grain pattern.  The bit that I did is in the middle of the picture with the more pointed knots in the wood.  Again, not bad, eh? I could see myself easily doing this one again. 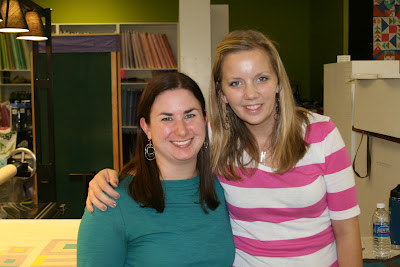 By the end of the day Angela and I were like new best friends.  She's actually thinking that if she has another baby, and it's a girl, she just might name it Jen.  (Just Kidding)  A couple of us from the BMQG went out to dinner with her at one of my favorite tapas restaurants in Waltham and had a great time. I feel like I have a new friend in the quilting community after spending so much time together (and no, I'm not a stalker).

If you ever have a change to take a class with Angela, I'd highly recommend it.  She's a great teacher that simplifies machine quilting for the average quilter.
Posted by Jen at 8:00 AM No comments:

This weekend I had the pleasure of spending time with the oh-so-talented Angela Walters as she visited one of my favorite local quilt shops, Quilter's Way, and spent some time with the Boston Modern Quilt Guild.

For the trunk show with the BMQG, Angela talked about how she got started in quilting and how she evolved as a quilter. As we progressed during the show, she talked a lot about how she goes about quilting a modern quilt.  She shared some secrets with us - like some new collaborations she has coming up that I'll let her tell you about soon enough. 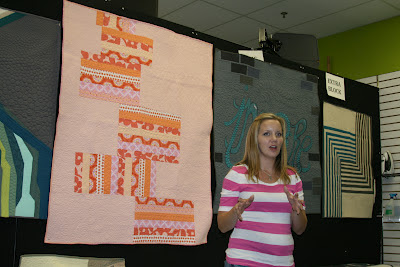 She shared some of her awesome quilts and talked about how she goes about quilting them. 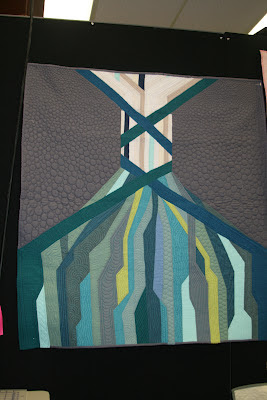 I'm sure you recognize some of these quilts from her book and her blog.  Let's just say that they were all awesome to see in person. 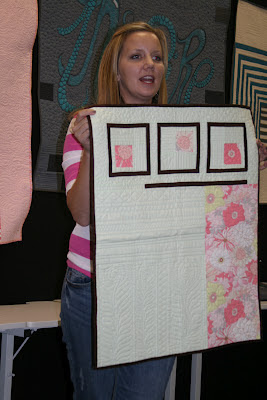 I loved this quilt.  Probably because the quilting was awesome and I love Art Gallery fabrics. 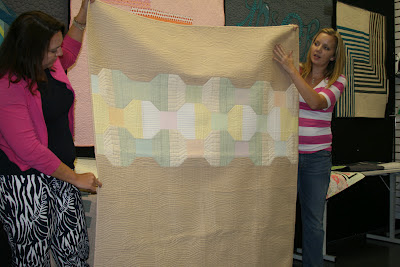 We were the first group that got to see quilts from her upcoming book, In the Studio with Angela Walters. 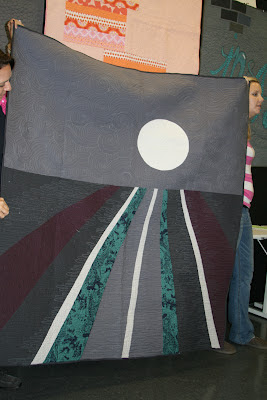 I loved this quilt.  Probably because I've always loved things celestial, and the quilting in the sky, moon and ocean were awesome in this quilt. 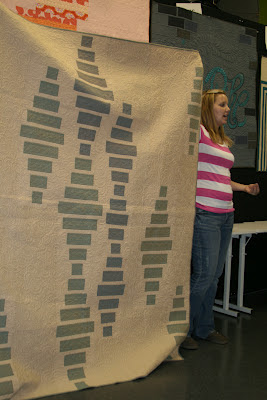 I loved the swirl quilting she did on this quilt.  I was happy that I got to learn how to do it during a class I took with her right after.  Now to find something to practice on. 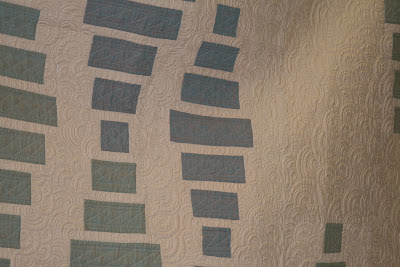 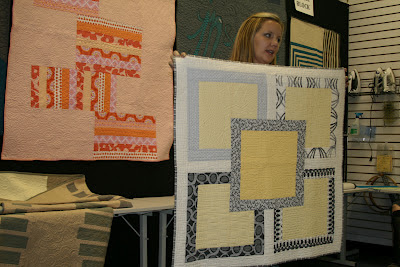 I wanted to steal this quilt to hang in my basement.  Hey, I did just redo it in a grey and yellow color scheme.  It would go perfect. 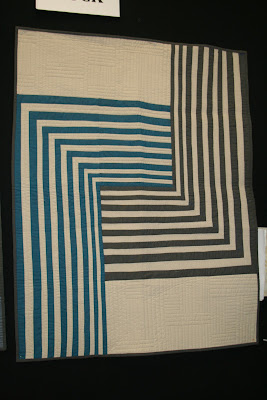 Anyone who knows me would assume I would like this quilt just for the abundance of teal in it. 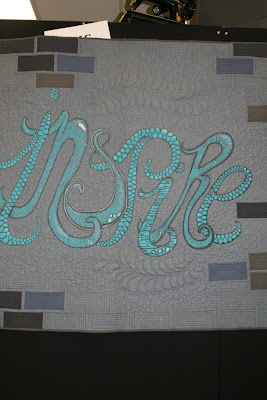 Looking at this quilt up close, it took me a little bit to realize that the quilt spelled out "Inspire." The quilting on this one is great too, but what else would you expect from Angela? 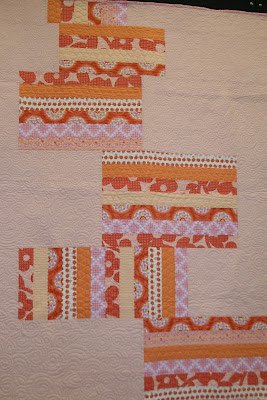 I do love me some good citrus colors in a quilt, and this one is no exception.

Angela was amazing.  She's an incredibly talented quilter who genuinely loves to share her craft with others.  I was lucky that I spent some time with her Friday night during an opening reception and basically all day Saturday.  She is such a genuine person and I truly enjoyed spending time getting to know her and pick her brain.
Posted by Jen at 10:12 AM 1 comment: 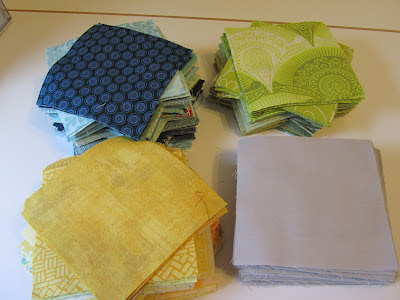 Using this same pile of fabrics, I am in the middle of creating another "baby" quilt.  I say "baby" because it really isn't for a baby.  It's for a sibling of a "still-cooking" baby.  I'm all about being equal. 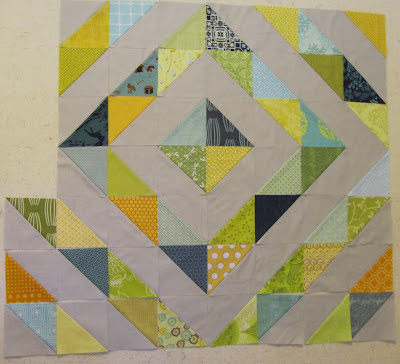 This is the start of this one.  I'm hoping to make this more of a throw or twin size.  The squares in the first picture are 5" square and I sew on either side of a center line to create two 4.5" HST blocks out of one set of fabrics.  I have a ways to go with this one, but I think it will be really great once it's finished.  I'm really linking how this one is coming out.
Posted by Jen at 8:00 AM 2 comments: