I've been doing a whole lot of running and working lately, which means I haven't had as much time for quilting as I'd like. But with the weather getting colder and with less daylight to be had, I've been able to sneak in more quilting time this fall. With that, I was able to complete a few quilts recently, including my "This Way Up" quilt. 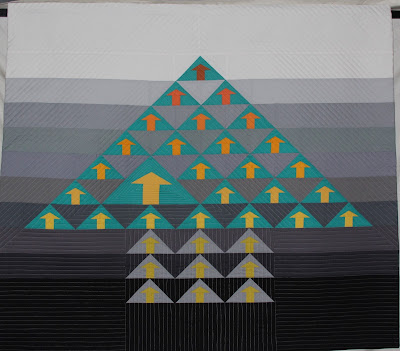 This is the fourth quilt I've completed in my flying geese series. I really love this quilt and had a ton of fun making it. From picking the colors in the ombre effect within the arrow to the grays and even the thread, which is a light Aurifil gray (2600). I always go with a lighter color thread if I'm using it across many types of fabric of varying value. When you get down to the black and charcoal gray it almost looks like sashiko on a smaller scale as a result. 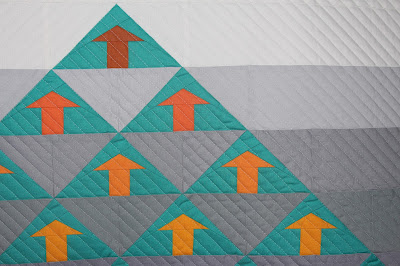 I paper pieced each block, which really isn't a surprise to anyone at this point. I quilted it on my domestic this time around with stitches a half an inch apart except within the one large teal triangle. That one has one quarter inch stitching to make it stand out a little.

The quilt finishes at 45" long and 41" high. It was made using Kona solids and pieced/quilted with Aurifil 2600 thread in a 50wt. The batting is Quilter's Dream Orient, which gives the quilt a really nice drape.
Posted by Jen at 8:44 AM