Can you believe we're already onto month three of the Kaleidoscope BOM? It feels like New Years 2016 was just the other day. I'm so excited about these two blocks because they start to get a little more detailed, which adds a new layer of dimension to these blocks. 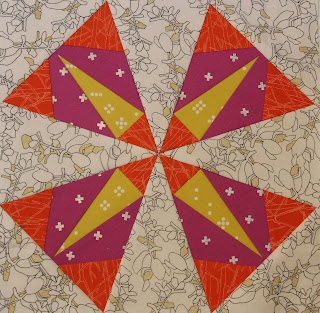 This first one is so cool to me. I love the way the orange in the middle creates a pinwheel, but it also adds a ton of depth to the lemon star. The plum secondary background adds a cool dimension to this block as well. I love the effect of the kaleidoscope pieces extending into the background as an optical illusion. The quilting could really enhance this when we're done. 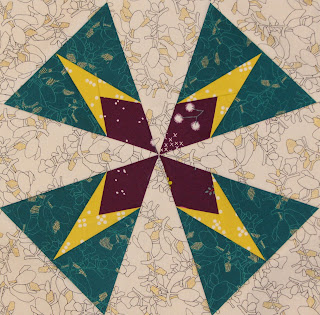 The second block for month three is also so fun. This one has a great out of space vibe to it. Maybe it's the fabric selection or the angles of the center of the star and the star itself, but I feel like I'm on Space Mountain going through the galaxy on a space ship. This just goes to show you how the fabric choice and pattern can really make a block pop.

If you want to download these blocks and join along in our BOM, hop on over to Craftsy. And remember, if you make any, make sure to share them on social media using #KaleidoscopeBOM

Check out the previous months too:
Month 2
Month 1
Fabric Selection
Posted by Jen at 12:30 AM