Adventures on the Quilting Frame

Yesterday, I went over to KK's to play with her new toy, a quilting frame that fits her Bernina.  She finally got it all set up and we decided to try it out.  Both of us have used a long arm before, so it wasn't that difficult to learn.  We both picked it up pretty easily.  To begin, we tried my Happy Hour quilt since it was the smallest quilt top that either of us had ready to go.
Here it is on the frame partially quilted. 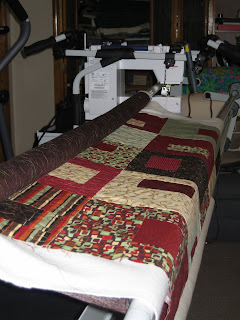 Here's the whole thing finished and off the frame: 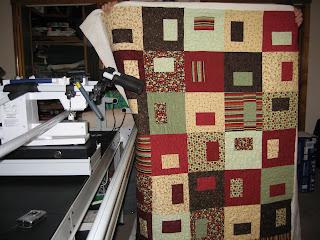 And finally, here's a closer picture of the quilting.  I stuck to a simple meandering since it's a stitch that I'm comfortable with, having done it several times before.  I originally wanted to do an all-over pantograph, but it just seemed easier to do a meandering the first time around on this frame. 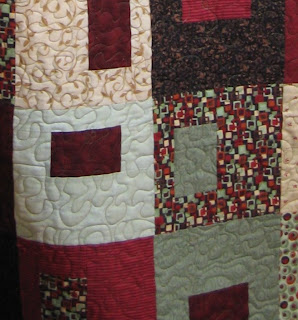 We both have a bunch of unfinished quilt tops, so hopefully we'll be able to make a dent in our piles.  One down, probably close to a dozen to go. ;0)
Posted by Jen at 9:55 PM