Today, after a productive day of working at home during yet another snow storm, I managed to put together the 4500 celebration block in the Carol Doak Yahoo group.  I've been in a paper piecing kick lately and thought this would be another quick, easy evening project.  Here it is. 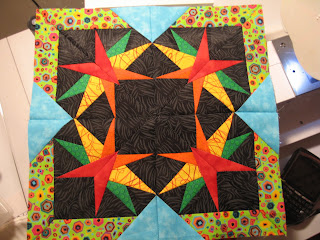 I originally had a dark purple instead of the blue.  The purple ended up being too dark, so I pulled them all out and threw the blue in instead.  I like the blue better then the purple.  It looks better in person.  For some reason the color is a little off and makes this blue look more baby blue like then the brighter blue that it really is.
Here's a close-up of the block.  You can see how the blue matches with the border fabric in this picture, although the color is still off somewhat. 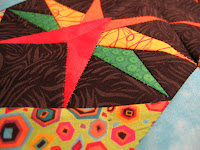 I'm thinking of putting some sort of fun applique in the center of the block to add another dimension.  Any suggestions?  Another star would be the obvious choice.  Any other suggestions?  Nothing too big though.
Posted by Jen at 8:55 PM