Guess What I Finished?

That's right, I finally finished the ten stars that are going to be a part of the border for my 12 Days of Christmas, FQS BOM quilt. 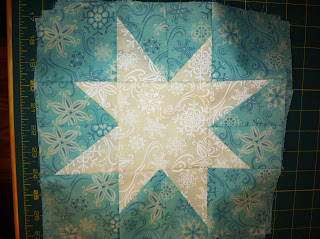 The tricky part about these blocks was matching the point where the white points met near the center of the star.  Because the white pieces were at different angles, I couldn't just line them up and sew 1/4" seam.  I had to slightly overlap one over the other.  Let's just say I became friendly with my seam ripper while piecing these.  After I pieced the entire block, I realized that it actually looked cool when some of the blue points were cut off because it gave the block a more random look, which is the look that I think the block is going for, so I actually did it on purpose on some of the blocks.  It's so counter-intuitive to cut off points that I tried to make perfect, but I like the effect.
Posted by Jen at 9:00 AM